Still problems in doing tethering with a manually configured APN (e.g. an employee one) using a Windows 10 Mobile device

There are still problems in doing tethering on a manually set APN using a Windows smartphone (both Windows 10 Mobile and Windows Phone).

Personally I think that it is a missing feature in the configuration code in handling the hotspot Wi-Fi in this O.S. Therefore I think it must be solved as soon as possible, especially if (as I understood) the main target for Windows 10 Mobile devices will be the business area and not so much the consumer one.

I already explained in a previous post how to set a new APN (for example a firm one) on a Windows 10 Mobile device, for both a new one (e.g. Lumia 950) and an “old” one (Lumia 920) updated as an insider [in this last one the user interface still remains like it was in Windows Phone 8.1 devices] .

While I haven’t never had problems in doing tethering, using my firm employee APN, with both Android and iOS devices (since version 9, September 2016), I had problems in doing that with my Windows 10 Mobile and Windows Phone. With that devices, while I was able to set the Hotspot mobile feature (and so do tethering) using a public APN (both TIM WAP and TIM WEB public ones) I couldn’t start it if the my firm employee APN is set: at first, whenever I tried to set the Hotspot mobile, the following error page appeared, saying that “I had no data connection to be shared“.

Obviously when my firm APN is activated (no mobile hotspot enabled) the Internet connection was fine and I could access also to my firm intranet … but no hotspot was settable!

In my old Lumia 1020 Windows Phone device I set the new APN from Settings -> access point (and the setting page it looks the same on the Lumia 920 one, updated to Windows 10 Mobile as insider)  while in the new Lumia 950 I had to go to the Settings > Network & Wireless > Cellular&SIM > SIM Settings > Add an Internet APN [where there is also, configuring a new APN, the new option “Use this APN for LTE and substitute it from the one of the mobile phone operator” (not available in Windows 8.1 settings) that I set to ON]. No way to understand why the hotspot mobile could be set on my Lumia 950 only with both the public APNs (TIM WAP and TIM WEB) and not the private one (e.g. a firm employee one)!

I supposed that it was a problem of the Lumia 950 firmware that was not properly updated because of the delay of this kind of updates for branded devices, so I even tried to made it not branded anymore … but also after that updates nothing changed.

I tried to set max 3G and, disabling LTE, and have current connection H+ in order to check if the problem should be at network layer … but nether that could help: no shared Wi-Fi hotspot possible and the same warning displayed.

Therefore I contacted the Lumia Support for business service, by filling out the proper form: I was suddenly contacted by technical people (Steff and Niko) and together we tried to find out where the problem was.

They asked me to download the Field Medic app from the Store to provide my logs with “Include Netlogs” enabled: after downloaded the app and opened it, I pressed Start Logging, I reproduced the issue, I went back to the app and pressed Stop Logging. I saved the Field Medic report that is then made available in Files: I select that report and shared it through OneDrive since it was too big for an attachment. But even the log analysis helped!

At the end it was suggested to reset the device using the Windows Device Recovery Tool on a PC  in order than that application should download and install the latest available software version for my Lumia 950: however because this action had been deleted all my personal data I preferred not to do it! I Know that it is possible to restore from a cloud backup all the personal , but it takes time to reinstall everything (even the apps) and have the smartphone as it was.

I knew that it was neither a matter of the APN configuration and nothing should be fixed on network side: tethering works even on private APNs for every other platforms, Android and iOS.

At a first glance, the problem seemed to be (strangely) solved setting the “Profile mobile network” to TIM WAP and NOT to TIM Web (these are the two available public APNs in TIM, that can be used both), even though the set APN is the private employee one! In my understanding the setting of the default APN to TIM WAP or to TIM Web shouldn’t matter because another Internet APN is selected (that is the firm employee one) and not the default one … but it seems that for some unknown reasons it is relevant also in that case!!

NOTE – Till Windows Phone 8.1, the list of APNs where alternatives and only one can be chosen among the following list: 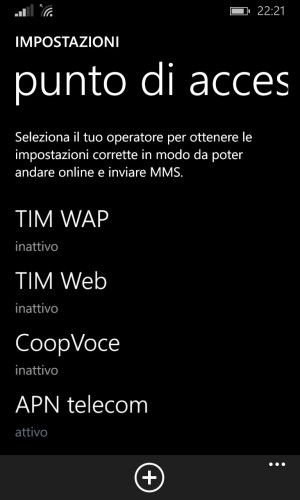 The selection available on an Android device is the following:

APN configuration in an Android device

If the new private APN is set in the “APN Internet” section, the “Hotspot mobile” can be set ONLY if the “Mobile network profile” is set to TIM WAP while it cannot be (“I had no data connection to be shared“. popup message) if is set to TIM Web (possibly the only enabled to do tethering) … even though the navigation and connection is fine in the smartphone with both settings of the “Mobile network profile” while the “APN Internet” section is set to the private APN.

P.S. (30/6/2016)
I thought that the problem I had was solved but unfortunately, I realize that all the traffic that is done through it as an hotspot, when (in the Network Settings) the firm employee APN is set goes NOT through that APN but through the public APN … so no access to the intranet from any hotspot Wi-Fi connected device!
This does not happen with an Android or iOS smartphone. 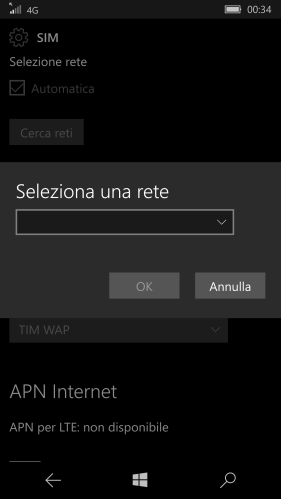 Una risposta a Still problems in doing tethering with a manually configured APN (e.g. an employee one) using a Windows 10 Mobile device