I was 15 years old when I received, as a Christmas gift, this electrical guitar.

I liked it since the beginning and now, that I just cleaned it and revised a bit (in truth, I only screwed some screws and cleaned some contacts!), it looks like nearly new … against all its years!

I searched in Internet for information about this particular model of that Ibanez guitar … and I realized that it is a rare model that was produced only for few years and today, in excellent original condition, this guitar is worth between $1,200 and $1,500!!

It was produced between circa 1974 and 1977, but serial numbers were not applied to Ibanez guitars until September 1975. Since my guitar does not have a serial number (I could want to check the potentiometers for date codes), it was most likely produced before September 1975: in fact, if I remember well, I got it as a Christmas gift in December 1974!

These Ibanez “copy” guitars from the 1970s are so cool in the opinion of many, as I found in my Internet searches. In fact, while it’s obvious they are copies of popular models, Ibanez designers applied their own artistry and flair to them—something Gibson and Fender rarely dared to try. The Custom Agent model 2405 seems to be listed in the book Ibanez: The Untold Story and older Ibanez catalogs.
Single cutaway mahogany body with a carved  maple top for good looks and tone. The mahogany neck features a 22 fret bound rosewood fingerboard with fancy banjo style inlays. Wild F style scrolled headstock. Dual Super 70 pickups deliver killer tone. A Tuneomatic style bridge and stop tailpiece keep everything solid. Deluxe sealed “star”  tuners too.  My example is finished in a nice violin sunburst. 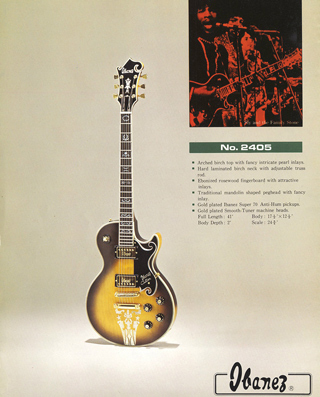 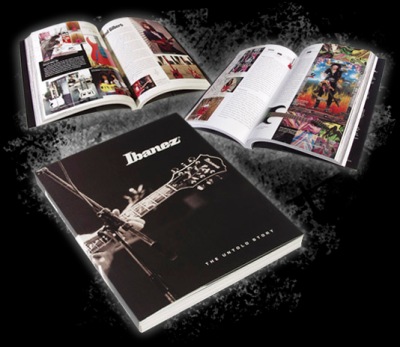 The development of this guitar is interesting, especially because the design is unique. But first, let me give some background on the “lawsuit era” of Ibanez guitars.

Hoshino Gakki started as a bookstore company in 1908 and began importing guitars under the Salvador Ibanez name in 1929. Hoshino bought the Ibanez company name and started making guitars themselves in 1935. In the 1970’s American guitar manufacturers were making poorer and poorer versions of their mainstay guitars, so Ibanez jumped in and started “copying” famous brand looks at a budget price. These copies were so good that Gibson sued the Hoshino company and now the Japanese guitars of this era are called the “lawsuit” guitars.

Up until the mid-1970s, Ibanez mainly offered Japanese-manufactured copies of popular American designs like the Stratocaster and Les Paul. The large American guitar manufacturers certainly didn’t appreciate the business they were losing as a result of Ibanez blatantly copying their instruments. And on June 28, 1977, Norlin (Gibson’s parent company) filed a lawsuit against Elger (Ibanez’s parent company) for trademark infringement, claiming Ibanez was copying Gibson’s headstocks too closely.

What many people don’t realize is that by 1975, Ibanez was already working on their “original designs.” By the time the lawsuit was filed, nearly all Ibanez guitars had a much different, non-Gibson-style headstock. That’s not to say the body shapes weren’t still being copied, but there wasn’t much Gibson or Fender could do about this since they didn’t have specific enough trademarks on their body shapes or styles. The lawsuit never went to trial, and Elger signed an agreement to stop marketing Gibson-copied designs and using model names suggestive of Gibson. Elger complied, but the lawsuit represented what was really more of a formality than a radical change in the way Ibanez built their guitars.

The Custom Agent model was one of the first Ibanez guitars to feature an original design: it was the Ibanez answer to the Gibson “lawsuit”. The body is obviously based on a Les Paul, but it has a mandolin-scroll-style headstock, banjo-style fretboard inlays, and a decorative pearl inlay below the stud tailpiece that gives the appearance of a trapeze tailpiece. Though it’s missing on my guitar, the stock pickguard for this model was also uniquely shaped with scrolls.

The Ibanez Custom Agent 2405 was only produced for a short time in the mid 70’s and was one of the top of the line guitars for the company. It featured the distinctive single cutaway, maple top and mahogany back and sides. The guitar also had some features that immediately set it apart from other LP copies. It had a mandolin scroll headstock, matching pickguard and a faux ivory inlay behind the bridge tailpiece.

So it has a mahogany body with a maple or birch top, a set maple neck, a 22-fret rosewood fretboard, two covered Ibanez Super 70 humbuckers and four knobs (two volume, two tone).

Nice medium sized neck, and set up really nice- plays great up and down it with no buzzes. Guitar is lively and resonant unplugged and the Ibanez Super 70 pickups Paf style vintage sound great plugged in with the High End touch with the classic F5 mandolin headstock scroll shape and F5 ornate fretboard inlays.

In the following some pictures I took of my “old” (but just cleaned 😉 ) Ibanez Custom Agent – model 2405 sunburst! 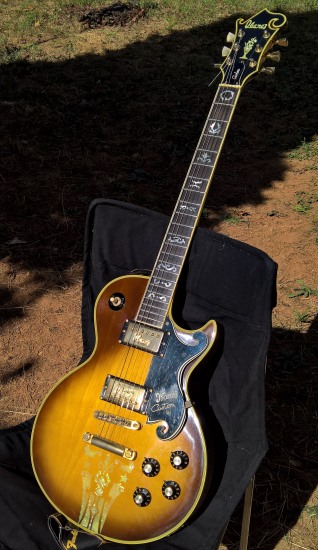 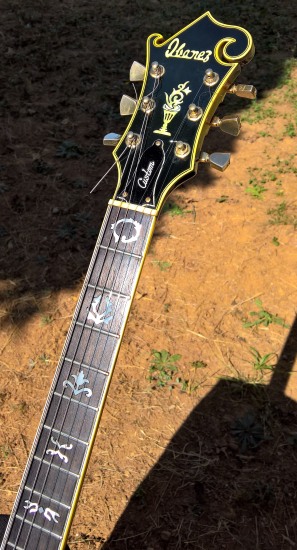 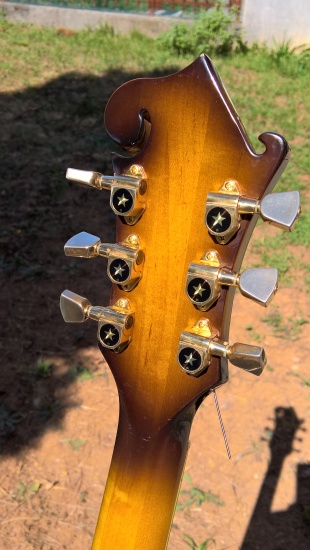 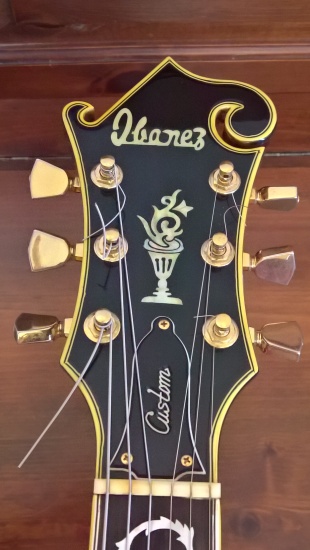 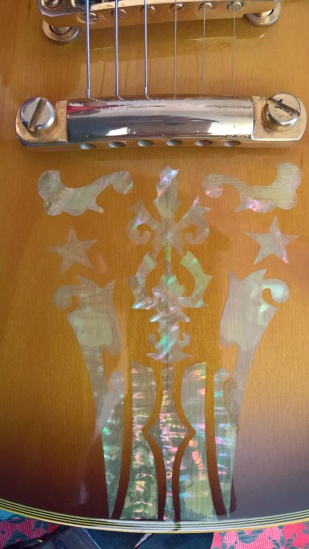 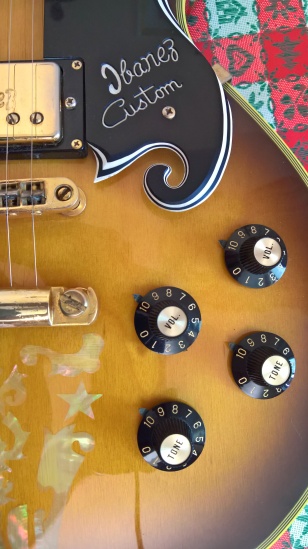 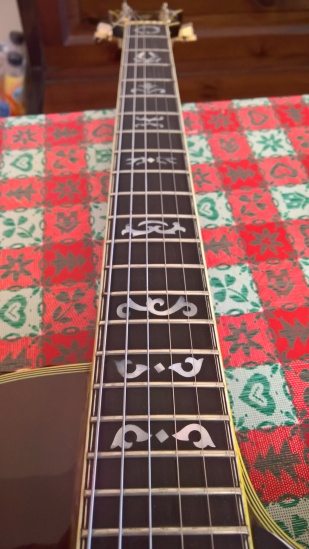 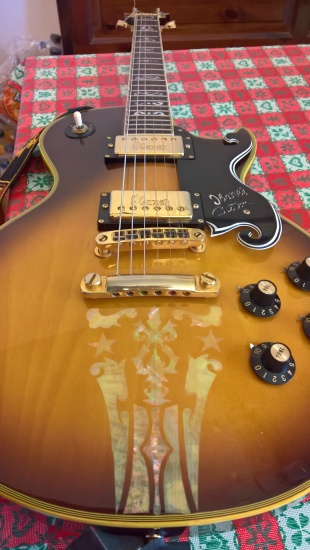 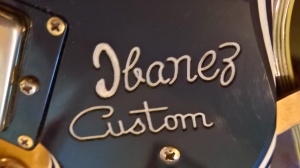 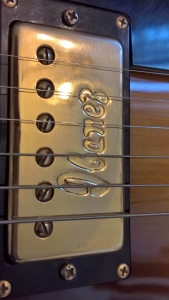 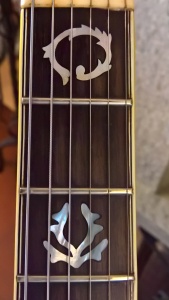 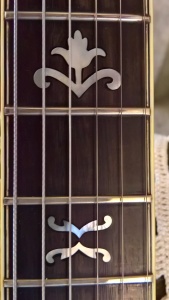 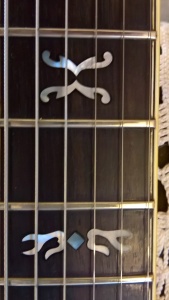 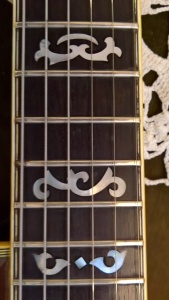 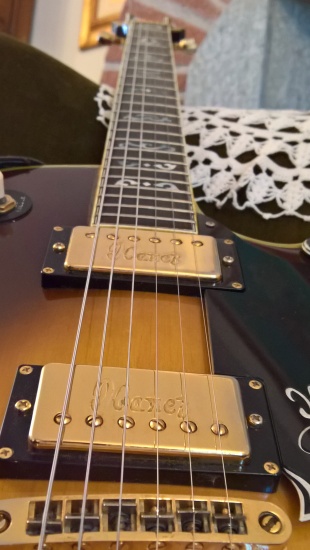 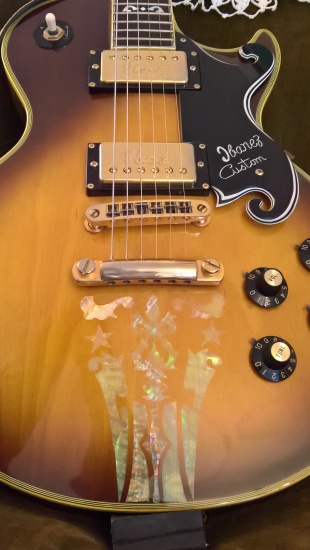 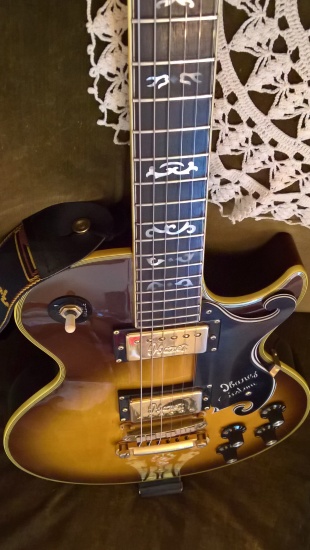 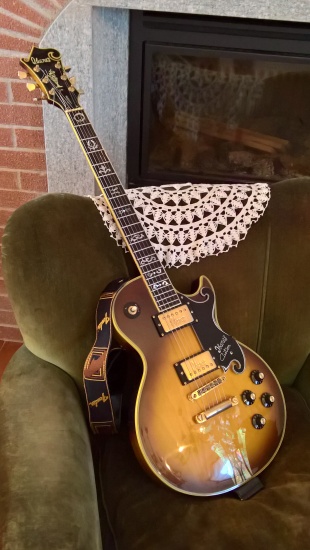 And at the end … how it looks like before I cleaned it:

On Internet I found the following picture of the same 2405 model of guitar but with a different color (however it is with a missing pickguard, likely non-original pickups, replacement knobs and tarnished hardware!):

Same 2405 model but with a different color

Currently, the Ibanez model that seems to be the nephew ot the Custom 2405 is the IBANEZ AR725-VLS … but now it is made in China (as said in the product description in the Amazon site) …

Most of the information of this post comes from the following sites: