How to update the browser to Internet Explorer 11 … and make it works even in an old PC ;-)

Unfortunately very often I find some guy still using, on his company employee PC, a very old version of Internet Explorer (even the very old 8 version, that was released in 2009!! … and you know that every accessed site can easily detect the browser type/version used by the user and its capabilities/vulnerabilities), sometime complaining about it … and possibly saying that it is much better Chrome or Firefox that he usually uses.

We can argue about what are the more performing browser’s features of each of the available browsers, but surely you cannot compare the latest version of one with the old version of another, especially when it is of more that 5 years ago!! Moreover the new Windows 10 have the new Edge browser, companion of the still available Internet Explorer 11: the new browser is an UWP app, that is its binary can run not only on a PC but also on whatever Windows 10 device, so even on a mobile smartphone, an Xbox, a tablet …

… but I know that in some firm personal computers have still Windows 7  and that the updates are automatically handled from remote … but at least the browser can be updated to IE 11 going in the official SW catalog page where you can find and download it for doing that update. You could also go to the Microsoft provided page to download it but it could be better to use your firm provided version.

However, some days ago a colleague that did that update had a problem: every time he used the browser search function, an alert popup appeared and a recovery function of that browser raised. The PC was old (let say at least a 5 years one) and possibly some drivers were not properly updated, but on a griffon PC the possibility to make any kind of update is made impossible!!! … even the needed ones

Therefore I solved that problem changing an advanced setting of the new installed Internet Explore 11: in particular I set the following option related to  accelerated graphic in order not to use the GPU rendering … 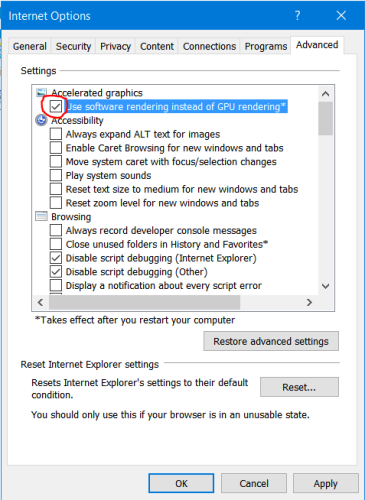 Therefore, if you run into the same problem, you can try to make the same change I did going in the Internet Options page 😉

2 risposte a How to update the browser to Internet Explorer 11 … and make it works even in an old PC ;-)