I did an update of Visual Studio 2015 and, as usual, at the end it asked for a reboot to complete the installation. However I was doing something else and I did not agree for an immediate reboot: that is quite usual, but the start of problems came when I decided, during a break, to do a system files clean-up (Disk Cleanup utility with administrator rights), deleting all the suggested groups, even the temporary files!! … this surely deleted also some files useful to Visual Studio to completed the upgrade after the reboot.

Then even after a reboot, launching Visual Studio 2015 it shows a windows saying that a reboot is needed to complete an installation … and so ever and ever. Trying to run again the installation or even uninstall that program, gave the same result!! Neither deleting the cache, as suggested here ( cd “C:\ProgramData\Package Cache“ -> Del /F /S *.msiDelete /F /S *.cab“) changed something.

The solution was to run, from Command Prompt (Admin), the installation file forcing the Repair switch:

Note that, as usually happens in prompt commands, the /? parameter displays (this time outside from the command prompt window, that is in a new one) all the available switches: 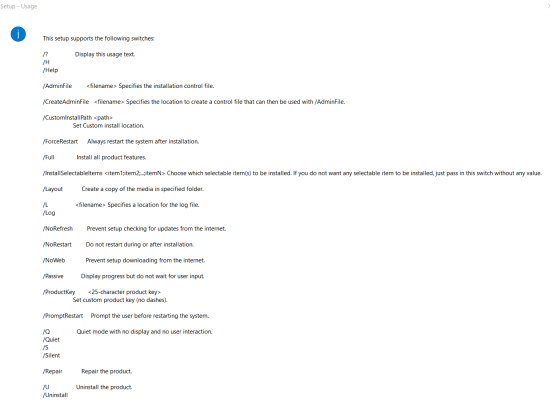 All the available switches for Visual Studio setup command

Moreover, if at the end of the repairing Visual Studio 2015 process the following error message is displayed (as it happened to me) related to the installation of the emulators, you only have to launch again the VS installation, click on Modify button and then uncheck the Universal Windows App Development Tools -> Emulators for Windows 10 Mobile option and press Next button. After that, you should have to check the same option again in order to have installed that component, this time without errors 😉 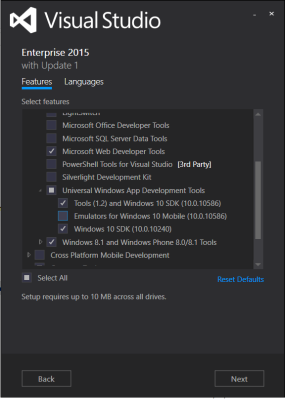