How to install an app you purchased and that is no more available for buying in the MS Store (e.g. Adobe Photoshop Express 15)

In the following I will explain how to install on a new PC (or even in the same old one, if you did an OS restore) an app that you purchased some time ago and that you cannot find anymore searching in the Microsoft Store. I will took, as an example, the Adobe Photoshop Elements 15 app, but the same procedure can be adopted for whatever app.

I bought, some months ago, the Adobe Photoshop Elements 15 app from the Microsoft Store and now, that I have a new Surface, I tried to get and install it again. However, when I did a search for “Adobe Photoshop” in that Store, I could not find anymore that version: now there are available for downloading only Adobe Photoshop Express – easy photo editor, the free lite version for PC and smartphones, and the new Adobe Photoshop Elements 2018, for a not irrelevant fee (99,99, currently on offer at 69,99€)!

So no way to find the old version (or an update from that version) and only the possibility to get the new 2018 version, … paying all again!!!

At first I was very disappointed because I thought that Adobe deleted from the Store the old version and so there should be no way to install it again on a new PC or even on the same one after a possible OS reinstallation! I even asked help in the forum available in the Adobe site but, at first, I received non sense answers (“It might be up to Microsoft“; “When you download a program installer it is always a good idea to save that file, and copy it to an external drive, so you will have it in the future“). I never saw a serious Company that delete one of its app from a Store, an app for a fee (especially an expensive one)!! I know that in a Store, the publication and deletion of an app is done by its owner, in that case Adobe, and there is no installer you can save (possibly even to an external drive) and there is no serial number to remember, but it is only an app association to your Microsoft account, so that app can be downloaded and installed in whatever supported device you are logged in with your Microsoft account. If the owner of the app (in this case Adobe) delete it from that Store, the user that bought it cannot install that app anymore (but if the owner of that app updates the same app, that will be updated automatically on that user PCs). So I supposed that, if Adobe deleted from the MS Store its Adobe Photoshop Elements 15 and uploaded another app instead (not updating the same old one), the owner of the old app cannot install it anymore. I did not pretend that the new 2018 version should be given for free as an update of the old one, but al least Adobe should maintain both versions in the Store, allowing who bought the old one to continue to install it on his PCs without having to buy the new version!! I well know too that Microsoft is not responsible of what the owner of an app does related to its updating or deleting from its Store: it only verify that the app respects some policy and security features … and it takes a % from each sale.

So, how could I install my Adobe Photoshop Elements 15 app I paid for an unlimited time?? I do not need the last 2018 version new features and I do not want to pay again the fee …
I started to think that Adobe people did not understood how Stores work …

But at the end I received a good suggestion that was to look at my Order history page available in the Store, looking if the Adobe Photoshop Elements 15 app was still available there. 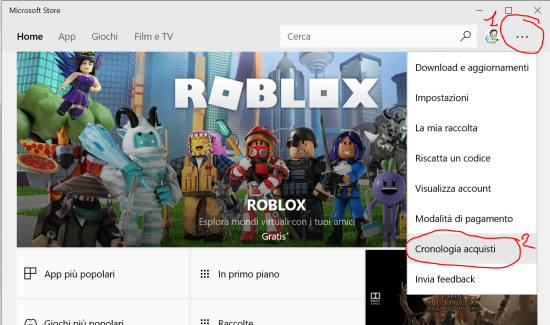 Go to the Order history section available in the Store

At first I did not find it in the list because I left the default last three month date filter. So, because I bought that app more months ago, I had to set that time filter to “All available elements” to finally find the older purchases.

Set no date filter if you want to get all the purchased apps in the list, even the old ones

So, clicking on the app name, I was redirected to the page related to that app and I could finally download again 😉

Personally I think that it is not so clear what the user should do to download an app he purchased but that its owner does not want to sell anymore (e.g. because it is no more supported, like in the case I took as an example): I saw other people that asked for help in the Adobe forum for the same reason … and the new 2018 release is just being published! The Order history page available in the Store is probably not very known by users that usually search an app using the specific find feature,

May be there should be a return of also the old app versions when you do a search in the store, even though that ones could be downloaded only by the users that already bought them …

PS: I see that the desktop version have some free updates to 15.2 version BUT in the Store they did not put no new free versions so I can get only the 15.0 version one!! I noted that in the app there is not the Update voice in the Help menu as it is in the desktop version so no update can be done from that site and the app must be updated in the Store by Adobe developers!! Anyway I then noticed thet those free updates were only for MAC version (to solve a bug) and not for the  Windows one that still remain the 15.0 one! 🙂