How to record a smartphone screen video

First of all I must say that every smartphone brand (possibly model) has its own way to record its screen, even though all that devices have an Android O.S. . In fact, this is a feature proper of an embedded app provided by the factory itself. For example, for some device, like the Xiaomi Redme Note 7, the shortcut to start a recording is to press simultaneously the switch on and the volume up buttons. While the simultaneous pressing of the switch on and the volume down buttons very often takes a picture (even in my Samsung device), that start of a video is not so standard (it doesn’t work in my Samsung smartphone).

Therefore in the following I will show you how to manage a recording in my Samsung Note 10 Plus smartphone … and take it in mind that it could be a feature available even only for some Samsung high-end models and not for all ones!!

The feature is no longer tied to Game Tools; instead, Galaxy Note 10 users can now start recording their screens right from the Quick setting menu at the top, available swiping with two fingers from the top of the smartphone screen: a Record screen [IT: Registr. schermo] function is available here. 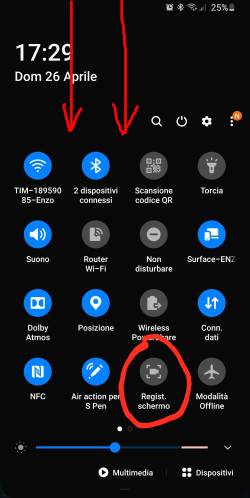 Quick setting menu at the top, available swiping with two fingers from the top of the smartphone screen

Selecting that Record screen [IT: Registr. schermo] function, you are asked if you want to start a screen recording and you have to choose among those options:

The last one is perfect for a tutorial … and you can also add a circle with the video of your face that you can position where you like and also choose the size you prefer.

By default it is shown the recording time and the stop button:

Recording time and the stop button

Pressing the < symbol, further functions appear, to add/remove the circle video during the recording or add pen signs on the screen with possible different colors:

The circle video can be moved where you better like

Moreover, in this video it is shown to possibly add the start screen recording even in the left Quick menu, in its Task edge [IT: Funzioni] section: this requires to install, from the Samsung Store, the Good Lock app and then from it install the Nice Shot feature app. In this way, the Take screenshot [IT: Acquisisci schermate] will have an additional action on the top of its tool bar that allows to start a video screen: 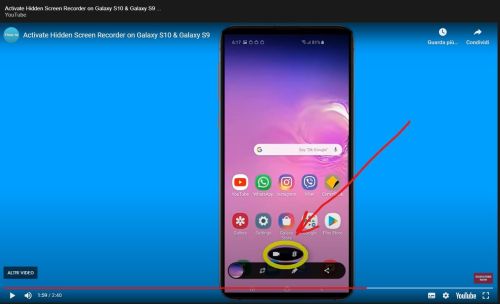 Unfortunately that app is not officially supported in many countries, like Italy, so you could not find it searching in the Samsung Store. Why this restriction? I really do not know … However there are several sites that give a link to download the apk from some mirror store, in order to install that app anyway (e.g. this site where there is this link to the page of Samsung Mirror store. The Good Lock apk version currently available is the 1.0.00.64, uploaded 16 March 2020). 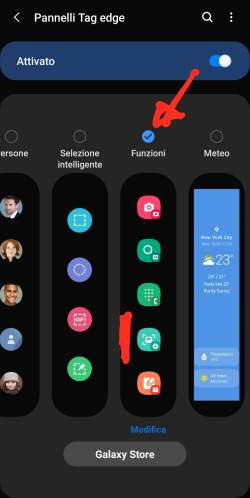