How to save passwords securely and standardly, sharing them with all your devices

I already wrote a  post related to password saving apps … because I had problems with the app I chose years ago for sharing my passwords among my devices!! Since that year,  I used (All My Password) an app bought from the Microsoft Store: it was fine but then it started not to work properly because I could not be able anymore to do a backup of its encrypted data on a cloud (i.e. OneDrive). As you can imagine, an app for saving passwords that does not allow neither to do a backup (even locally) of its data nor to synchronize them among different devices (e.g. PCs, smartphone) is not useful at all!

So, once recovered the more recent data that it was possible, the matter was to choose another app for saving passwords:  it was a hard choice because I did not want to have to copy ones again all my passwords any more in the next future!! I wanted to chose not a proprietary solution, that again could possibly not be supported in a few years, and possibly one that has several cross-platform clients available, possibly a standard/opensource one … and possibly even a free one!!.

I know that Enpass could be a good solution because it is cross-platform, and on Windows 10 it integrates well with Windows Hello. It allows to save data also on whatever cloud provider (e.g. OneDrive) and finally, you have to pay only once when you buy it.
1Password should be another good choice too, but it is more expensive because it uses a subscription model, even though this gives a greater assurance that it will be supported and possibly improved in the future.

However, unfortunately, both these apps are not UWP and are not available for Windows 10 Mobile too and at that time I was still using my good Lumia 950XL so, I had to find another solution … and possibly even a free one!!
So I opted for KeePass 2.x format for storing encrypted data because there are several clients for every platform that uses that format, even UWP ones.

In particular, for my Windows PC, I choose  PassKeep, a UWP app that seems to have a good support and it is interoperable with KeePass 2.x format: there is an official website for this “free, open-source, light-weight and easy-to-use password manager“.

Other apps compliant with that format are KeePassReader, pt.KeePass and possibly there are others in the Microsoft app Store. Moreover, there is a desktop application that can be downloaded directly from the official keepass site:

Keepass client on a Windows PC/tablet

PassKeep app on Windows has the following very friendly user interface. The last opened database.kdbx is suggested, but you can open whatever kdbx file or create a new one.

It is convenient to put the password DB file in a folder synchronized with a cloud (e.g. the OneDrive one as I did). Using a cloud allows not only to have a synchronization of those keys among devices but it assure also that this file will not be lost. Maybe it is less secure even though I think that clouds now are possibly more secure than your personal Hard Disk that could be lost somewhere!

Each time you open a kdbx file, you must provide the password you choose when you created that file. Note that the password should be strong because if that file goes in the wrong hands, some SW could open it with programmatically provided passwords … Even changing the password every now and then, could be not useful because if whatever version of the file gets stolen, the thief has all the time to crack it … so better choose a very long and complicated password: possibly some apps help in choosing a complex one. 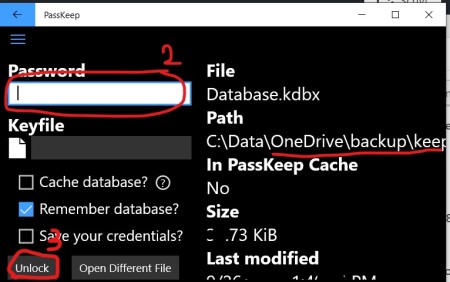 You can then create folders (i.e. group) in order to better organize passwords and find easily: any way, you can use the search feature to find anyone you want inside a path! 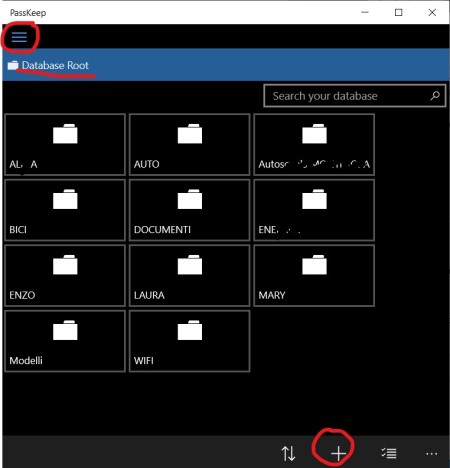 The form that allows adding a new key, have already some standard fields but you can even add some more if you need:

The left top menu allows both to reach the Setting section and to provide a Password Tool to help you to set a strong password.

Keepass client on an Android smartphone

On my Android phone, I installed the client Keepass2Android that is one of the many android apps compatible with KeePass format. Its interface is even better than the previous one. Also, in this case, the first thing to do is the insertion of the password you choose for the chosen kdbx file. By default, it tries to open the last used one, but you can close it and open a different file.

The first time you are asked to select the file or create a new one:

You could open a Database.kdbx from whatever directory you have share in one cloud (e.g. OneDrive) but it is much better to have the app itself synchronize that DB. So, using the open file option, you can choose a store method you prefer:

I chose OneDrive because I selected those cloud to share the DB when I configured my PCs, but you could use whatever cloud you like more, …. but the same choice must be obviously done on all devices!!
In my case, having already installed and set the authentication in OneDrive app, after a while, all the folders I have on that cloud were shown and I had only to navigate on them  to select the proper .kdbx file I want to open, the one already synchronized with my PCs:

All keys are then displayed, or better first the folders, if you organize them in that way: 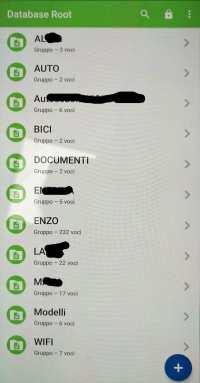 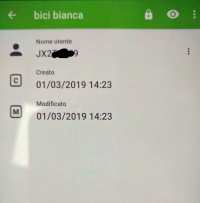 When you add a new key you are asked what kind is it, so the proper items will be requested:

You may force the synchronization of the key DB, from the upper right menu (the three dots one), so all the updated keys will be available on all your devices (PCs, tablet, smartphones).

For Windows 10 Mobile I used the same KeepPass app that however did not provide an automatic synchronization: on a PC this is done by OneDrive app but here on a smartphone neither OneDrive app does not provide an automatic synchronization (in general, it is not the best scenario for a mobile device) but it only allows you to browse your account and save locally the files you need.

So, to update the DB in my Windows 10 Mobile smartphone with the version on OneDrive, I had to do it manually: I downloaded from that cloud the Database.kdbx file and, for example, I saved it in the local This device/Documents folder, so I could open it with the KeepPass app I installed on the smartphone.
NOTE: because there is already a file with the same name (the old local version), you need to delete it before downloading the newer file from OneDrive (or rename it to OLD): otherwise it will be saved as Database (2).kdbx as shown in the following screenshots and you need to rename it afterwards. 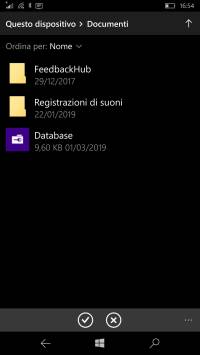 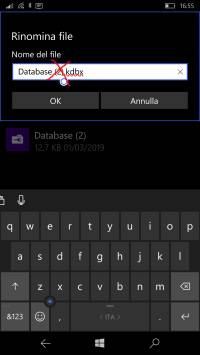 Because I usually insert/update passwords on my smartphone, the procedure I need more, from time to time, is another one, that is to back up the local DB on the smartphone to OneDrive. This can be done sharing the DB file to OneDrive, for example choosing to upload it on its \backup\keepass folder, that is the same directory I synchronized on PCs and that contains the file used by the KeepPass app in all PCs. 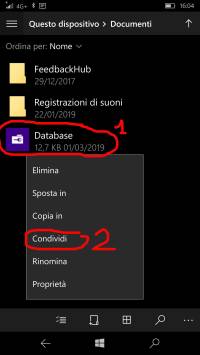 Share the\Documents\Database.kdbx file to OneDrive, choosing to upload it on its \backup\keepass folder (1)

Share the\Documents\Database.kdbx file to OneDrive, choosing to upload it on its \backup\keepass folder (2)

Share the\Documents\Database.kdbx file to OneDrive, choosing to upload it on its \backup\keepass folder (3)

NOTE that, because there was already a file with that name, the newer file will be uploaded as Database 1.kdbx so you will need to delete the old one and rename the new one as Database.kdbx. In this way, that file will be automatically synchronized in all your PCs with the proper name. To understand the newest file you can anyway always see its size (usually the newest is bigger because you possibly add new passwords) and its uploaded date too.

I know for a Windows 10 Mobile smartphone it is not an easy procedure, but neither a difficult one but it works … and possibly you need to do a backup only once a week or even less!!

Una risposta a How to save passwords securely and standardly, sharing them with all your devices